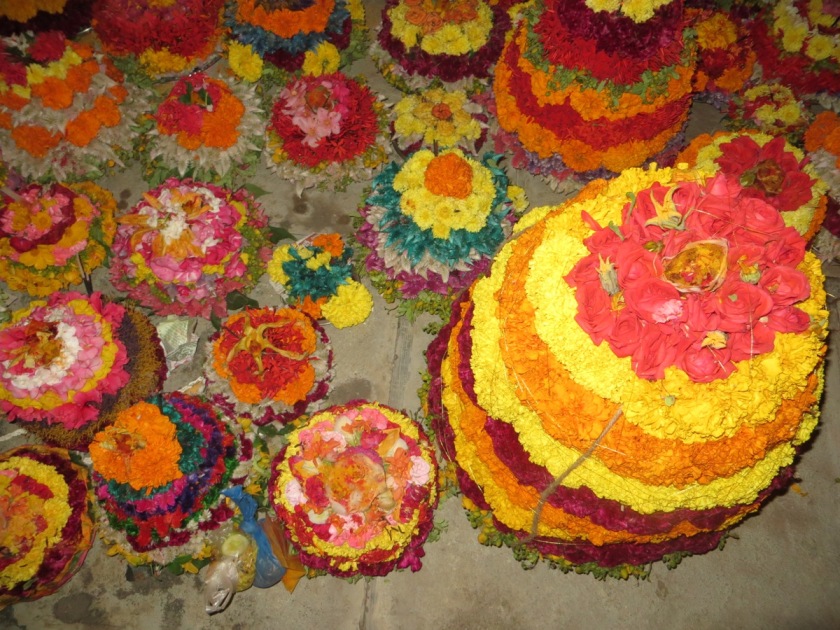 Cheat Sheet Fact of Life: Bathukamma is also called as the festival of flowers.

After a gap of seven years, I got the opportunity to celebrate Bathukamma and Dussehra at home. In Telugu, Bathuku means live and Amma means mother. The festival is worship to the life giver or Goddess Shakti. Legend has it that Devi after killing the demon, Mahishasura faints. All the women pray for her to be alive by saying ‘Bathukamma (live mother), Bathukamma’. Devi wakes up on Dasami. Bathukamma is celebrated by the women of Telangana region on the day before Vijayadasami (Dussehra). Flowers of different colors are arranged in concentric layers on a tambalam (brass plate) and stacked up on top of one another to form a conical structure, which is also called as Bathukamma.

On the morning of the festival, I participated in sorting the flowers used for making the flower arrangement. The flowers which we used were tangedu (cassia), gunugu (celosia), velvet flower, banthi (marigold), chamanthi (chrysanthemum), lotus and pumpkin flower. The flowers were arranged in nine layers. The belly of bathukamma should be filled with flowers and leaves as well; otherwise the pyramid structure would not stand. The heavy belly made the bathukamma also heavy. After making the bathukammas, they were placed in the puja room, in front of God.

In the evening, all the women of the household got dressed up in their best attires. We took the bathukamma from the puja room and started to the nearby Venkateshwara Swamy temple. The temple was crowded with women folk in their dazzling sarees and ornaments. I loved the attire of the kids; they were completely traditional in pattu langas, their long plaited hair was bedecked with pearl ornaments or ornaments made with multi-colored stones. 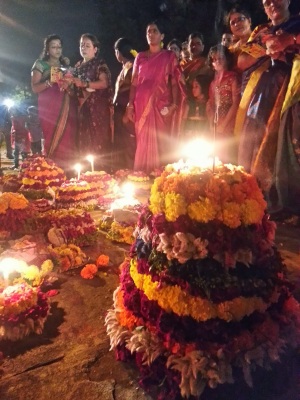 Bathukammas in the glow of candles and jewellry of the women

At the temple, there were Bathukammas of all sizes and colors, little ones were cute and big ones were magnificent. The women danced around the bathukammas by clapping their hands in a rhythmic fashion and singing the folk songs of bathukamma. After completing the song and dance ritual, the women gave each other pasupu (turmeric), kumkuma and sattu pindi prasadam (roasted powdered corns mixed with sugar or jaggery).

Bathukammas of all sizes, shapes and colors

The bathukammas will be baded goodbye by placing them carefully in the water to be carried away by the waves. There is a story behind this tradition. A sister comes to brother’s house to visit him. The brother leaves to the town on some work just before she comes. The sister decides to stay until her brother comes home. She goes to the lake to bathe along with her sister-in-law. Their clothes on the bank of the river get mixed up. The sister ties the saree of her sister-in-law and vice versa. They have a fight and the sister-in-law throws the sister in the river. In the night, the sister comes in the brother’s dream and tells him the sordid story of her death. Her brother goes to the river, and on the bank, he sees a tangedu plant.His sister says, ‘I became the tangedu plant after sister-in-law threw me into the water. Make bathukamma with tangedu poolu and throw it into the river’ and her brother does as he is told and the Bathukammas are immersed in water to this day. 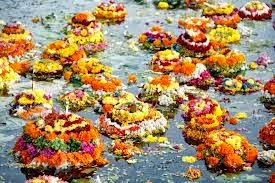 I grew up listening to the stories of bathukamma from my grandmother. She told me about the mega-sized bathukamma’s they made during her childhood and how four or five men got together to lift the bathukamma to carry it to the nearby temple. I am glad that I finally participated in one. Bathukamma will indeed be one of my favorite festivals.