Cheat Sheet Principle of Life: Do not underestimate the power of good will. Be good and do good. Good things will eventually happen to you.

‘I am Malala’ is an autobiography of Malala Yousafzai. Malala is teenage education activist from the town of Mingora in Swat district of Pakistan’s northwestern Khyber Pakhtunkhwa. She became renowned worldwide after she was shot by the Taliban and suffered fatal injuries.

Malala was born in the land where sons’ are given greater importance than daughters’. Only her father rejoiced her birth. He asked his friends to throw sweets and dry fruits in Malala’s cradle, something which is done only for the boys. Malala was named after Malalai of Maiwand, the greatest heroine in Afghanistan. Malalai inspired the Afghan army to defeat the British in 1880, in the Second Anglo-Afghan War. She came under fire and lost her life in that battle. Just like Malalai, Malala also fought a battle for girls’ education, she came under fire but she survived.

Malala had a simple desire, to go to school and learn. Under the Taliban regime, Malala’s right to education was revoked. The Taliban oppressed women. If women went outside, they were allowed to go only with their husbands or brothers, and they had to wear the burqa at all times. They also bombarded many girls’ schools, so that girls would not go to school. In that age of oppression, Malala protested in her own way. She wrote a blog on BBC under a pen name. She revealed to the world, life under the Taliban regime and the atrocities of Taliban. After that she publicly went on to the radio and television, gave interviews and publicized girls’ education. In tough situations, it requires the courage to do the right things. At outset, I felt that this girl has done nothing extraordinary. But, if you are aware of the power of Taliban and how she could be punished for her acts, then indeed she has done a feat which requires extreme courage.

I also understood the power of good will, how everything will eventually come back to you at the right time. Malala’s father is an activist who supported girls’ education. He went through great pains to set up a school in Swat region. He gave free education to those who cannot afford to pay the fees. Malala’s mother always cooked in excess so that she could feed anybody hungry who came to her doorstep. Her parents’ good will came back to Malala.

When Malala was shot she was bought to the Military Hospital in Peshawar. The bullet grazed by her skull and lodged in her left shoulder. At the same time, two doctors from U.K, Dr. Javid Kayani and Dr. Fiona Reynolds were in Pakistan, on some other engagement. They suggested taking Malala to be treated in U.K, to increase her chances of survival. Dr. Fiona specialized in moving critically ill children and treating them in intensive care. She was the right person for the job. When the issue of transporting Malala to U.K. came, the ruling family of United Arab Emirates offered their private jet to take Malala to U.K for treatment. All the decisions and actions were taken at a swift pace; otherwise Malala would not have survived. I felt that the Universe has conspired to save her.

I wish Malala’s dream to become a politician and help people will be realized soon. 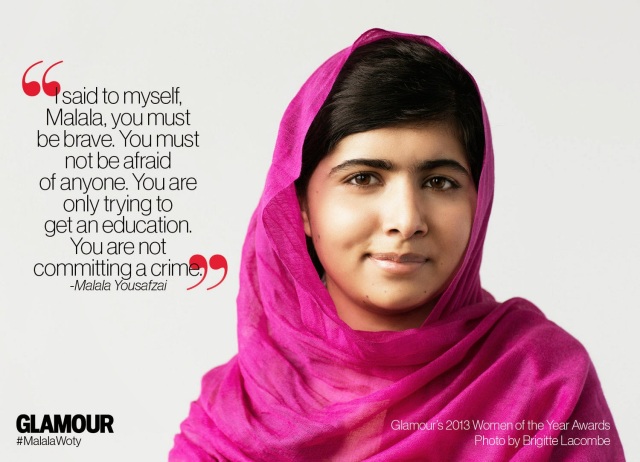 I am Malala book image from google images. Background from Photo Credit: ginnerobot via Compfight cc

Background modified to include the picture of the book.