Harvard University campus is open to the public during day time. You will always see a group of people in front of the John Harvard statue. People rub his toe for good luck and pose for a pic. This statue is called as the ‘Statue of Three Lies.’ 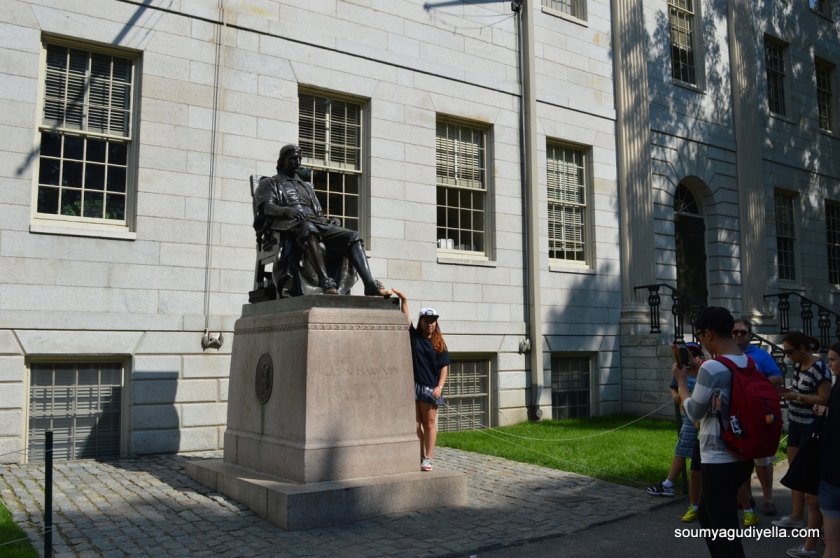 The inscription on the statue reads John Harvard, Founder, 1638

First lie: The statue is of Sherman Hoar, not John Harvard.

Second lie: John Harvard is not the founder of Harvard University. John Harvard was the first major benefactor. He donated half his estate and his library to the University.

Third lie: Harvard aka New College was founded in 1636 by Massachusetts Legislature. New College was named as Harvard University on March 13, 1639 after the benefactor John Harvard.

After Harry’s death his mother, Mrs. Eleanor Widener came to Harvard with $3.5 million (back in 1912) and offered it to Harvard to build a library in the memory of her son. Harvard was eager to take the money and tear down the existing library. Well, Mrs. Eleanor was intelligent. How could she trust that her son’s memorial will not be torn down if a richer donor comes in future?

Mrs. Eleanor had 3 stipulations for donating the money.

Stipulation #1: No brick or mortar can be removed from the original structure. Otherwise the library and the land beneath the library will go to the City of Cambridge.

Our tour guide told us that there are five floors beneath the library building. Since they cannot modify the original structure, they dug deeper to expand the library.

Stipulation #2: A reading room within the library is dedicated to Harry Elkins. The only two people who are allowed in the room are Harry Elkins (yes the ghost!) and the librarian, who changes the flowers everyday.

Stipulation #3: Every student from Harvard University should learn how to swim to graduate. Mrs. Eleanor blamed the death of her son on his inability to swim.

Harvard University repealed this stipulation in 1970s because it was deemed discriminatory against physically disabled students.